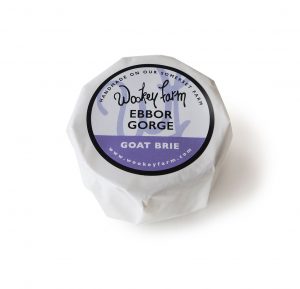 I (Sarah) started making cheese in 2012, trying a few different recipes with lots of trial and error. I then had a consultation day with Chris Ashby, which was an excellent chance to learn all the specifics of our lovely goats milk. Soft cheese is easier to make so to start with I concentrated on a range of soft cheeses, bottled milk and yoghurt.

Goats milk has some different characteristics to cows milk and some health benefits particularly for people who find it difficult to digest cows milk. This is due to goat milk mostly containing the A2 casein, a type of protein that appears to be less allergenic and less inflammatory than the A1 variety which is prominent in most cows milk. It also has lower levels of lactose and 20% smaller fat globules compared to cows milk. This makes it easier to digest both for humans and other animals. We often get asked for milk to feed puppies!

You can use the same recipes for goats cheese as those for cows. Sometimes the starter culture is slightly different and I always go by the recommendations of the experts who I buy my cultures from.

One product that needed quite a lot of trial and error was the yoghurt. Its very hard to get a thick set with goats yoghurt so I tried various different starter cultures, lengths of time in incubation and temperature changes. In the end, because I personally like a thick yoghurt and don’t believe in 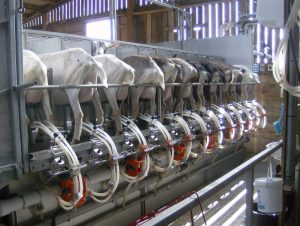 Following the success of the soft cheeses, I then started making hard cheeses in 2016 and again had a consultation day with cheese-maker Val Bines to get me going in the right direction. I made two hard cheeses – Burcott (a simple hard cheese) and Monks Ford (a cheddar-style hard cheese). The Burcott has proved more popular so I make much more of this one. At a young age, it is mild but with a distinctive tangy flavour. I then aged some to about 2 years where they have a lovely strong flavour and crumbly hard texture, almost like a Parmesan. 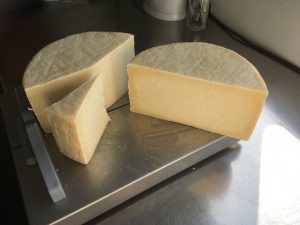 I’ve always believed that the secret to making good cheese is down to that all important main ingredient – milk. Our goats are fed on meadow hay (winter) with a great variety of grasses in the mix, or the actual grasses during dry weather when they can graze outside. A good balanced diet, plenty of outdoor space, stress-free life and lots of attention from campers and visitors make for happy goats producing delicious milk. We stick to their natural cycle so the Billy goes in in September and kids usually start appearing late February. This has the disadvantage of us having no milk to process for about 3 months (last two months of pregnancy they are dry and then the kids get all the milk to start with) but it works for the goats and to be honest its quite nice for us to have a bit of a rest and catch up on other forgotten jobs. 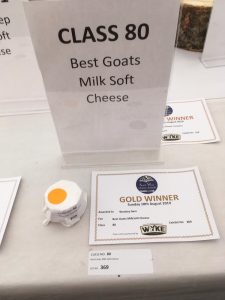